On 27 of November 2019, over 60 Canadian Parliamentarians and staff attended a parliamentary event – “Hong Kong at a Critical Time”, which was hosted by Garnett Genuis MP and Kenny Chiu MP. Hong Kong Watch co-founder Aileen Calverley and Joey Siu of Students’ Union of City University of Hong Kong were amongst the speakers at the event. Members of Parliament of Canada across all three political parties – Conservative, Liberal and DNP – attended in support of Hong Kong’s freedoms and democracy, including Pat Kelly MP, James Bezan MP, Tom Kmiec MP, Michael Barrett MP, Heather McPherson MP, Marie-France Lalonde MP and Senator Victor Oh. Ms Calverley of Hong Kong Watch recommended the use of Magnitsky Legislation to impose sanctions on Hong Kong government officials and police officers who were responsible for violating fundamental human rights and freedoms during the months-long protest. The suggestion was widely accepted by the Members of Parliament in attendance who have requested to receive a proposed list of names for sanction. 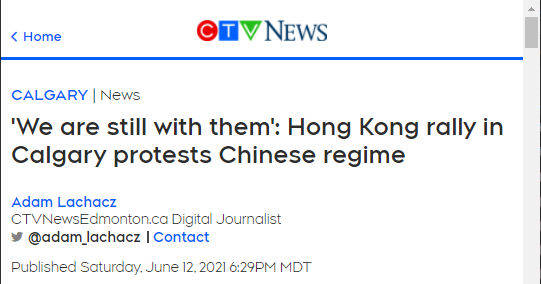 CTV: ‘We are still with them’…

Thank you CTV News for covering the anniversary event of the Water Revolution, started inRead More